Riley’s second e-scooter, the RS2, might cost more than the entry-level model we reviewed earlier in the year, but it adds a handful of improvements for an extra £100, including a longer range and a more powerful battery.

However, this bump in price brings the RS2 into dangerous territory. Riley’s top-end e-scooter finds itself competing against the terrific Pure Air, and it struggles to pull ahead.

Riley RS2 electric scooter review: What you need to know

For your money, the Riley RS2 comes with a powerful 350W motor, 10in pneumatic tyres and a 12.8Ah battery with a quoted maximum range of 28 miles per charge. 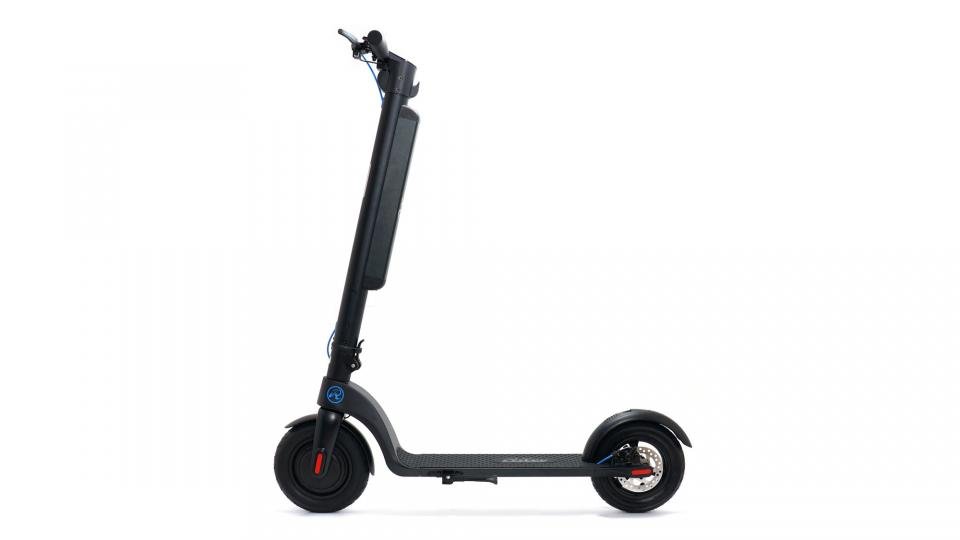 Like the RS1, the RS2’s big selling point is that it comes with a detachable battery pack, meaning if you buy a spare to carry around, you could ride even further without needing to charge en route.

Yet again, it’s important to make clear that electric scooters are classified as Personal Light Electric Vehicles (PLEVs) in the UK and are therefore illegal to use unless you ride on private land with the landowner’s permission or as part of an authorised rental scheme.

Although there are no specific laws in place, we also recommend riders wear a helmet and always follow the manufacturer’s safety guidelines.

At £499, there are other electric scooter models on the market that may not have a detachable battery but have similar or vastly superior specs. The Xiaomi Pro 2 is currently on sale for £50 less (£449) and it has the same 28-mile range and 300W motor as the RS2, but it’s noticeably lighter (12.5kg versus 15kg). However, the larger tyres of the RS2 (10in versus 8.5in) give it a slight edge.

As I mentioned at the start of this review, the Pure Air (£449) is also worth considering, especially since it sits at the top of our list of this year’s best e-scooters. With IP65 water resistance and a more powerful 500W motor, the Pure Air is better in more ways than one, while also costing less.

Unlike the RS2, both the Pure Air and Xiaomi Pro 2 come with accompanying apps that provide detailed battery and mileage information as well as unlocking extra features such as cruise control and motor lock – yet more stuff the RS2 lacks. 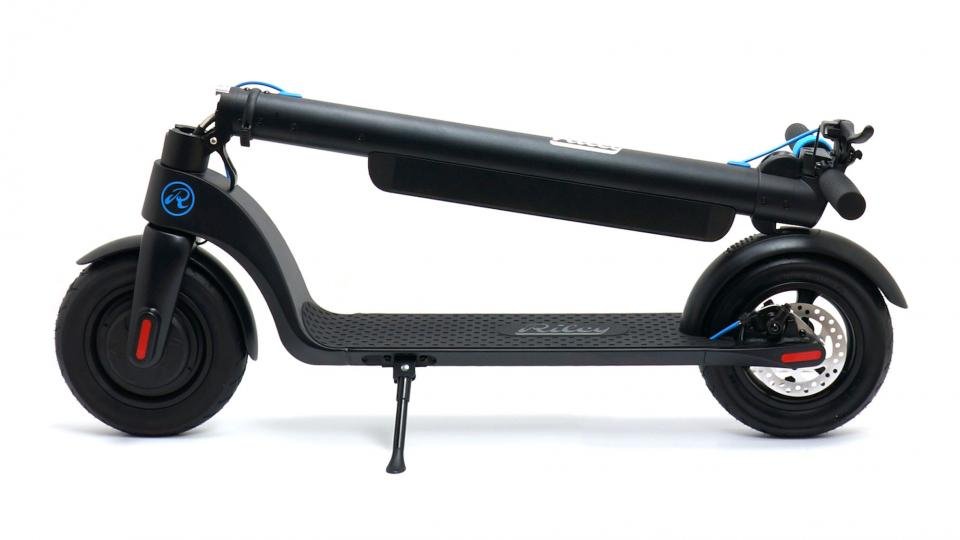 Setting up the Riley RS2 is nice and simple. After unfolding the e-scooter into the upright position, you just rotate the ring at the bottom of the stem and lock it into place. The brake then slides onto the left side of the handlebar and this is tightened in place with an Allen key, before the grips are screwed onto either side.

The RS2’s bright blue brake cables and throttle sit nicely in contrast against the e-scooter’s black stem, base plate, handlebar, wheels and mudguards.

Speaking of which, the aluminium alloy stem is a bit bulkier than other scooters I’ve tested, and this is made wider still by the attached battery pack. However, I much prefer this design, since it should help protect the battery from puddle splashes and kerbs, which can be a problem with scooters that mount the battery underneath the standing deck.

The bright LED display sits in the middle of the handlebar, displaying speed, riding mode and battery status when you switch it on. The scooter’s throttle is located to the right of this small screen, with the brake and bell on the left.

Weighing 15kg, the Riley RS2 isn’t the heaviest e-scooter on the market, nor is it the lightest. It has a weather rating of IP54, which means it can be used in puddles and light rain, and it’s also built to carry a maximum load of 100kg.

The RS2 has three riding modes – Beginner, Normal and Sport – and you can switch between these by pressing the function button on the throttle. The Beginner mode’s maximum speed is set at just over 6mph, Normal at 9mph and Sport is 15.5mph. 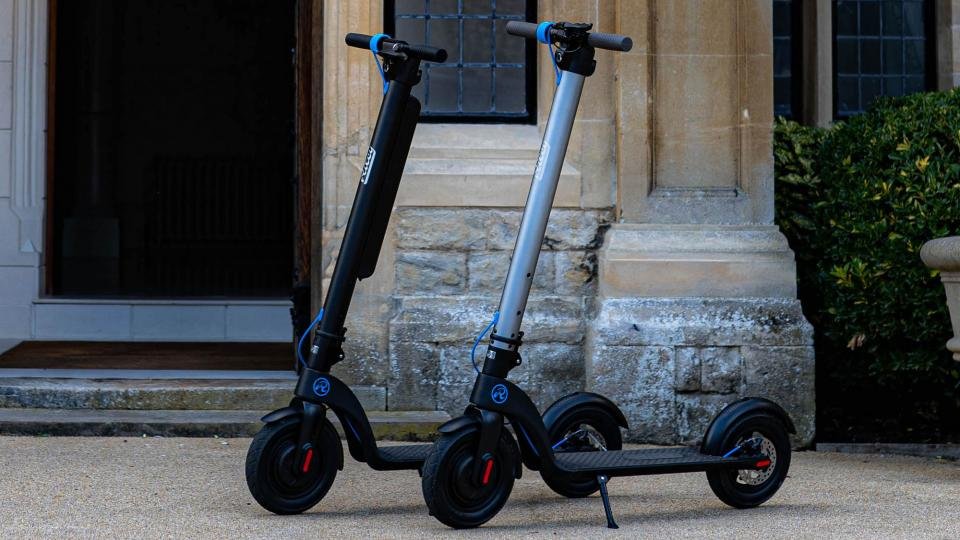 Cruise control retains your riding speed and this automatically engages when you hold down the throttle for six seconds. I found this to be very useful since it allowed me to give my thumb a bit of a break without having to worry about the e-scooter suddenly changing speed.

The RS2’s best feature is its ability to swap batteries quickly. Unfortunately, I wasn’t sent a second battery to test, but I was able to take out the current battery and pop it back in in less than ten seconds.

The lack of a companion app continues to be a major annoyance. Unlike other e-scooters, you won’t be able to lock the motor remotely, check how far you’ve travelled or determine how many miles you have left before needing to recharge the battery.

If you want to get going, you simply need to switch it on, give it a kick start and gently press the throttle. The RS2 is initially set to Beginner mode, which is quite slow, so I spent most of my time alternating between Normal and Sports.

From a comfort point of view, the RS2’s 10in tyres do a good job over potholes, and I could swap terrains from pavements to grass and concrete easily without changing speed or losing control. Cruise control is another welcome addition, especially if you’re riding long distances.

The scooter feels sturdy even when riding at higher speeds, and the triple braking system did a good job of bringing me to a stop quickly and safely within three seconds. However, my review unit produced a squeaky noise when braking suddenly at higher speeds.

While the 350W motor provided a good amount of oomph, there were several instances where a steep hill would force me to get off and walk, which is never ideal. Other scooters with similar specs have at least managed to get me up a couple of these hills, even if they did chug along a little bit.

Riding range, comfort and hill-climbing are the most important aspects to consider when choosing your e-scooter and, from a range point of view, the RS2 comes out well. After five miles of riding in the fastest (Sport) mode, I still had three bars of battery life left out of five, and you can swap the battery out for another should you need it.

The Riley RS2, like its predecessor, the RS1, is a no-fuss, robust and comfortable e-scooter. It has decent range and with the added bonus of a detachable battery, you should be able to ride out even further as well.

However, with the Xiaomi Pro 2 and Pure Air costing less, the Riley RS2 isn’t quite the complete package. Lacking a companion app and struggling with steep inclines, it’s another decent effort from Riley, but you can do better for your money.

Prices of the Galaxy S22: Leaked euro costs in comparison with the predecessor

Get a refurbished iPhone 12 Professional Max for under $399.99 on this Verizon deal!